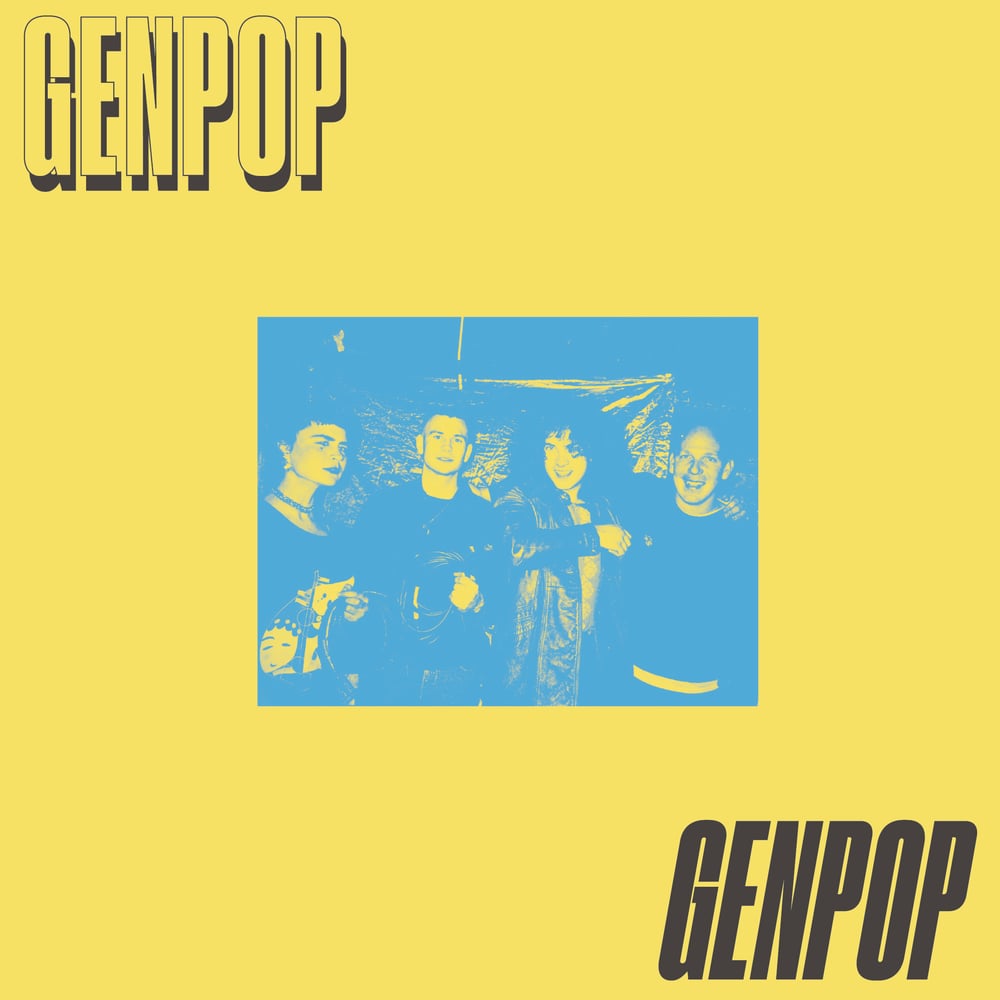 by VEXX and Gen Pop

Four voices tousle loudly as they leave the soft realm of the body, venturing out into the world. Reproduction and traditional instruments (guitars, drums, samplers, digital, voices) allow the human generation to play right now. Playing is intersubjective, we appeal to consciousness. Here in the human era we dialog, reference, and reproduce with traditional reference and frustration. Kissing lightly decided harmonies, Gen Pop plays in the human generation and is from the human era. Playing used in its most remedial sense, an occasion to slap together a narrative and generate trust between each other.

Gen Pop produced a small run of tapes featuring 3 tracks from their debut 7” on Upset the Rhythm earlier this year.  This 7” brings to totality the sinews and olfactory system of the Gen Pop promo tape. The essence of what they are doing and not the end of it. The first track ‘On Screen’ whinges lackaday about screen oriented living. “I’ll be chained and beaten, in a motel room its our first time meeting” shoots the moon for the loneliness of access and an end to curiosity (good riddance). Honestly though, a screen can and will be held by all.

The product of exposure can be found in ‘Easy’, the ballad of confused ability. The lacing of MaryJane Dunphe’s noise guitar, brought back to life from her days in Polly Darton, meld with David Strother and Theo Maughan’s air tight rhythm section. Ian Corrigan, playing 2nd guitar, and Dunphe vocalise together in frustration, this all should be quicker, easier. Corrigan and Dunphe played together previously in Olympia, WA’s maelstrom of punk and passion known as Vexx (also released through Upset The Rhythm).

‘Teach Me How To’ peaks in winding energy, standing tall as a pinnacle of frustration and excess. “The poor need lessons, they’re far too crude, but what about your life? Have you known rot tooth” Dunphe cries in resistance to plutocracy and vapid hegemony. Access will be had by all, but not until the human era is over and the internet is a human right. In ‘Dear Jackie’ simple harmonies on the guitar lap lightly at the toes of a bulky thick rhythm section that is strolling late night on the beach. Each note that Dunphe and Corrigan hit are planned to harmonise, intention over expression. Strother’s voice digs deep into choosing, choosing an ending, his pummelling drums and margin walking sense of genre helps the band approach a more lighter sound.

Finally, closer ‘The Wall’ can speak for itself. “I know, we’re guilty, these eyes so milky,” the powerless individual’s eyes cataract while watching an indigenous land be divided by a white contingency. And if its called white supremacy they might as well “ take my head and turn it clockwise”. Needling guitar parts crescendo into a furious finale, reminding all that Gen Pop as one of the last human bands are trying twice as hard to keep ahead of the future.