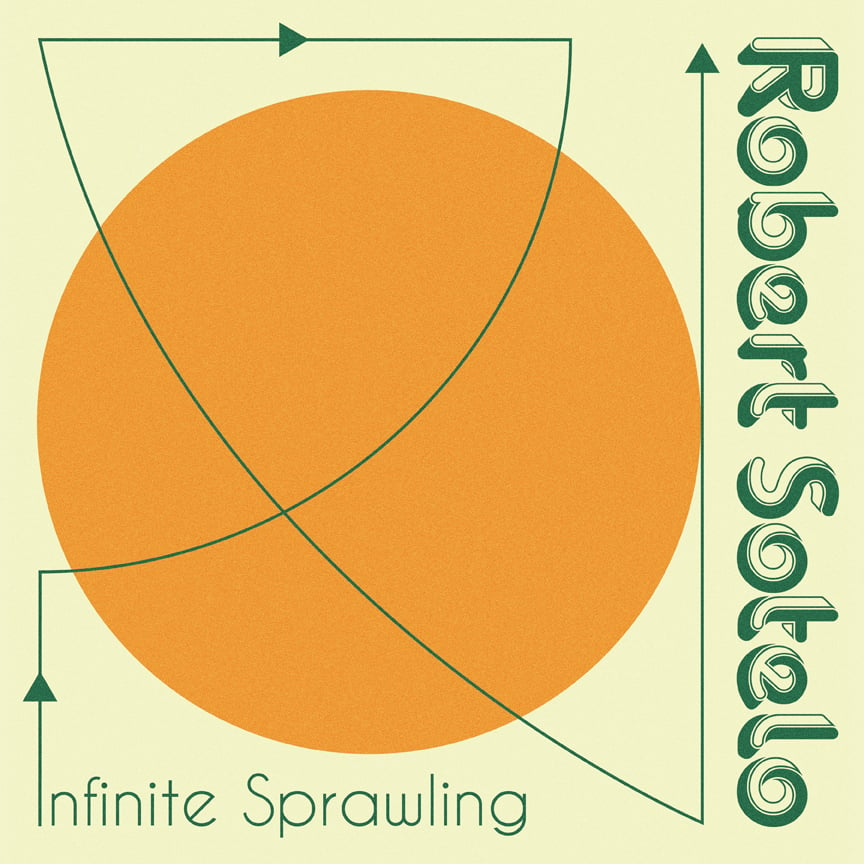 Robert Sotelo is a cosmic pop melodist; a heartfelt multi-instrumentalist whose direct songs are curiously affecting. His debut album ‘Cusp’ from 2017 was packed with miniature psych overtures and earnest musings, he then followed this up in 2018 with an album called ‘Botanical’, more keyboard-minded and playful with its near-absurdist palette of sound and reflective mood. This September Upset The Rhythm will release Sotelo’s third album ‘Infinite Sprawling’, his first record since relocating from London to Glasgow and partly inspired by his new city’s inclusive and collaborative musical world. Recorded with Ruari MacLean (of Vital Idles, Golden Grrrls) and Edwin Stevens (Irma Vep, Yerba Mansa) at their home studio Namaste Sound, ‘Infinite Sprawling’ grew out of Sotelo’s sketchbook of skeletal songs, with MacLean and Stevens developing their own drum, guitar and keyboard parts. These songs pulled together like a wakeful stretch on a Sunday morning, flowering with a lightness of touch, sounding both carefree and brisk.

Sotelo has always excelled at matching up the prosaic with the profound and on ‘Infinite Sprawling’ he does this with aplomb. A collection of casual revelations, lifted out of the mundane, are explored throughout the album’s ten sprightly tracks. ‘Something Besides’ opens the record in blithe reverie, “please don’t be offended if I do not listen, I’m caught in my mind” cautions Sotelo amid nods of country-twang guitar. ‘Mister’ follows in lively attitude, splintering with spidery bursts of fuzz. The minuscule and overlooked elements of the everyday are held dear and become in the hands of Sotelo something poignant, even monumental at times. Through a lyrical list of items in the breezy tumble of a song called ‘Battery’, “a cigarette, a battery, a lip balm and a watch”, Sotelo muses on the anxieties inherent in forging a new social life when you move city. A similar theme carried by ‘The Set Up’ which deals with discovering his new neighbours’ tropes, the track strolls into the sun with its echoed refrain of “the house is slowly creeping into life”. ‘Roof’ and ‘In The Style Of’ also boast this analytic quality, making sense of the world through its small things first, both unabashedly melodic with blushes of tremolo blushes and inventive arrangements.

Title track, ‘Infinite Sprawling’, refers to Sotelo’s final trip to Buenos Aires as a regular excursion to visit his mother, it’s a farewell to the city and makes for an interesting counterpoint to the other songs’ new starts. Commencing with the sound of babbling frogs the track builds up with scrappy digital percussion, snaking keyboard motifs and strummy guitar into something tangibly majestic. The lyric bounces calmly along “what a way to feel small in the infinite sprawling”. ’Piece Of Cake’ meanwhile is a more brooding effort, essentially a contemplation on lacking culinary skill. “The kitchen cupboard is a maze, but with instructions it’s a piece of cake, make sure to measure out a solid weight and form the salad on a plate” sings Sotelo with delight in his precision. Twisty wah guitar lines tag along with Sotelo’s vocal, each tugging at the sleeve of the other, while tambourines and keyboard pulses resound over the clicky drum accents.

This keenly robust album of new beginnings and strategies for living is quietly drawn to a close with ‘Message Of Beauty’, a relaxed ballad of drowsy farewells, swoons of violin and swirled clouds of organ drone. It occupies the very heart of the album, interested in adjustment and resolution in a muted, delicate manner. ’Infinite Sprawling’ is an album born out of new friendships, in a new country and for all its feet-finding sounds confident and emphatically considered. It’s a work of autofiction in search of quietude, a sublime treatise on the nostalgic threads of rock music, but more than that it’s a signpost to the next destination, a place where Sotelo knows he’s content to have arrived already.