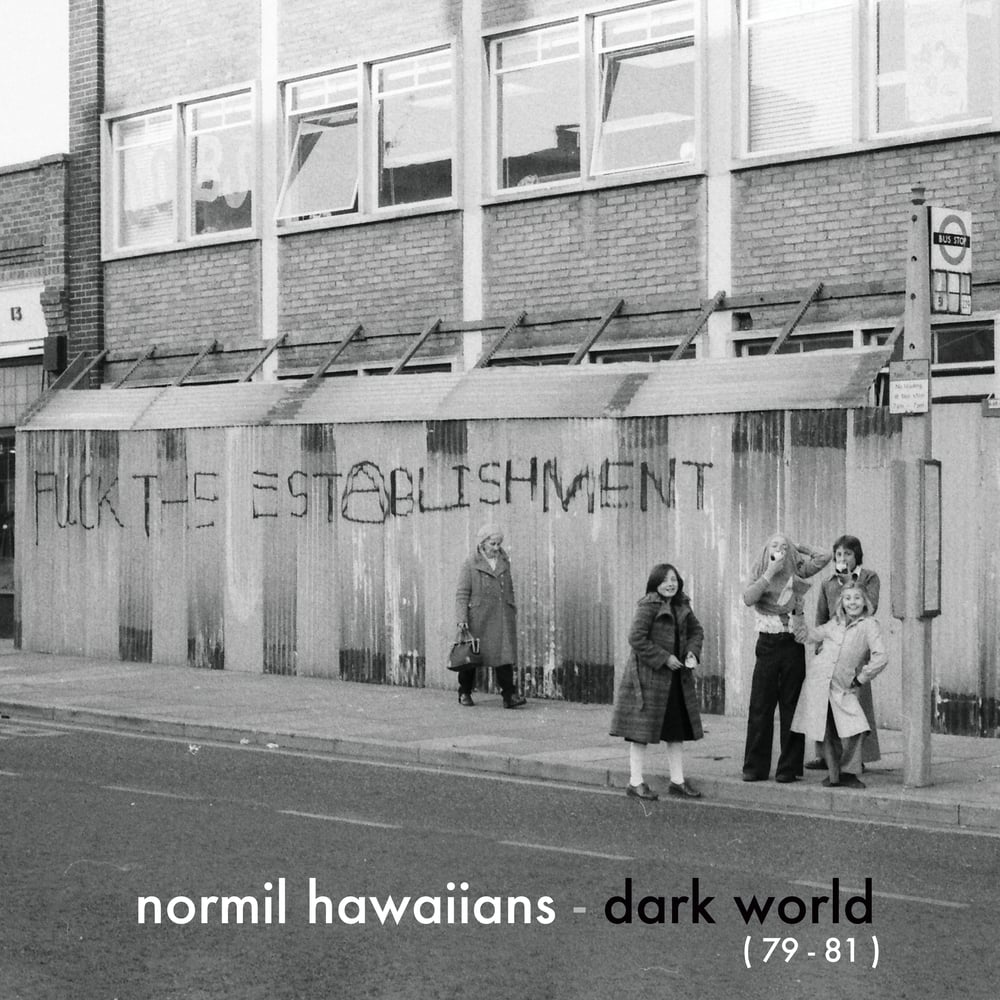 ‘Dark World’ collects together choice material from Normil Hawaiians’ formative early years of 1979-1981. Tagging along with the band from their peppy post-punk origins (so brilliantly debuted on ‘The Beat Goes On’) into the looser, dubbier territories that laid the foundations for the group’s landmark album ‘More Wealth Than Money’. ‘Dark World’ gathers the group’s energetic 7” singles on Dining Out and Illuminated Records, their metamorphic ‘Gala Failed’ EP (Red Rhino) and a lively last-minute Peel session from 1980, alongside outtakes, rarities and demos.

During this feverish time, founding member Guy Smith was motivated to make music that reveled in always trying out different things. Normil Hawaiians was a very fluid ensemble at this point, Guy often accompanied by Kev Armstrong and Jim Lusted encouraged saxophones, violins, synths, pianos and a select pack of female backing singers to take their post-punk sound into wilder directions. One of the earliest line-ups of Normil Hawaiians featured a 15-year old Janet Armstrong on vocals alongside Guy, ‘Ventilation’ best showcases her deadpan digressions. Janet went on to sing alongside David Bowie a few years later on his breathtaking mid-80’s gem ‘Absolute Beginners’. By this point Kev Armstrong was also guesting for Bowie on guitar duties too.

Another guest to join the ranks of Normil Hawaiians during this fertile time of cross-pollination was Bertie Marshall (aka Berlin of the proto-punk Bromley Contingent). ‘Sang Sang’ is a good example of how he was inspired to deliver his poetic treatise over the band’s atmospheric, floating improvisations. Bertie’s impressionistic influence helped the group uncouple further from rock tropes, as they became restless and more rhythmically-focused. ‘Still Obedient’ fidgets, soars and careens across the dancefloor, “if you’re ahead close your eyes, you won’t notice the subtitles” chants Guy.

By the end of this transformative two years Normil Hawaiians had spun an exceptional chrysalis around themselves. The dark world surrounding wouldn’t win out, they’d eaten-up the music and grown continuously, wrote and recorded rapidly, covered Zappa & even David Lynch and could feel the light beginning to shine through. ‘Dark World’ is a snapshot of a band in flux, finding their feet, stretching their limbs. Normil Hawaiians cover an awful amount of ground in such a short time-frame on this record and these tracks document all the glittering debris from their magpie’s nest. Emergent, hopeful and resistant in sound and ethic.