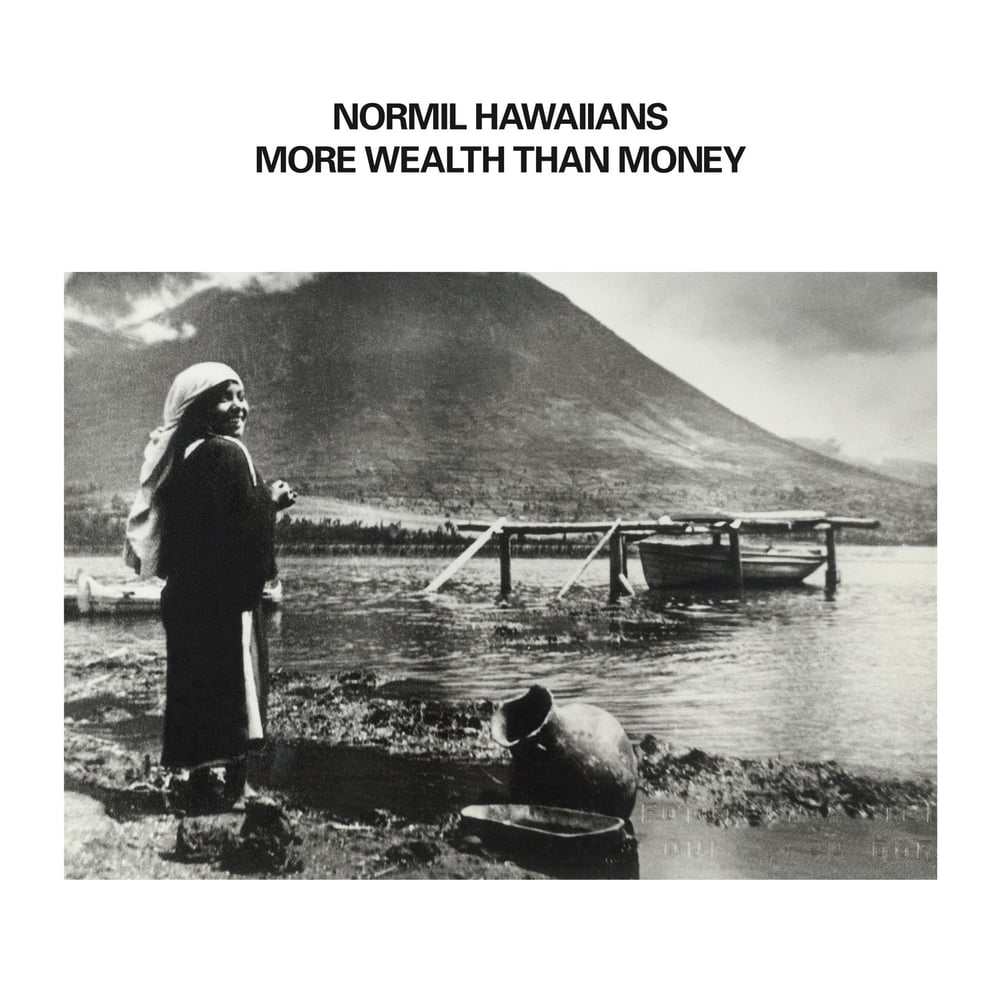 Normil Hawaiians had a transformative 1982. With two 7” singles and a 12” EP under their belts they suddenly found themselves disillusioned with the increasingly generic sounds surrounding them, so they forced the hand of change and began reaching out with that very hand. The band’s true constant in Guy Smith soon found himself with a new crew of musicians, Simon Marchant, Noel Blanden and Mark Tyler. Normil Hawaiians’ communal take on post punk quickly sprouted leaves from its mouth, and began carving out a new furrow. Greater emphasis was awarded to improvisation within the group and as a result their songs embarked on longer, freer journeys towards the beaten bounds. They wanted these new songs to bear the weight of their new collective spirit so comfort zones had to be left behind. Tape loops, echo boxes, extended percussive sessions and duteous faith in the tones emanating from a particular old wah-wah pedal were all employed by Normil Hawaiians to stretch their sonic fabric into wild and redolent new dimensions.

With Illuminated Records interested in the band’s new visionary approach, Normil Hawaiians relocated from their South London dystopia to a rural idyll in the Welsh hills, determined to develop further this raw language for themselves. They booked into Foel Studios near Llanfair Caereinion for an extended period of time, set the tapes rolling and didn’t look back. They were somewhere they knew they could experiment; at a studio that understood the results would be uncertain. Dave Anderson, who managed and engineered at Foel was exactly the right person to work with them. Anderson had come from an experimental background himself, having played in Hawkwind and Amon Duul II. Normil Hawaiians were encouraged to explore their ideas beyond limitations with Anderson happy to leave the tape recording to capture their embryonic improvisations taking shape. Anderson even joined in on bass for several of those sessions as the ensemble strove to find its authentic voice, supplemented further when their cellist friend Klaus dropped by to spend a spell with them.

At this very moment Normil Hawaiians existed solely for the music, living together in a small cottage in the studio’s shadow, sharing everything together and working long days to nurture and then burnish the music they had discovered between them. This is how the band’s debut album ‘More Wealth Than Money’ was formed, through trial and close listening, through cultivation and patient growth. Of course there were significant amounts of mushrooms involved too and several UFO sightings, but when the sheep began to march in time to the music Normil Hawaiians knew they were creating something unique.

‘More Wealth Than Money’ proved a vastly ambitious debut album, sprawling across four sides of vinyl in a way that still feels truly expansive, brave, cinematic even. From the plaintive pastoralism of ‘British Warm’ to the transcendental vistas of ‘Other Ways Of Knowing’, the album constantly surprises with its ringing trails of guitar, motorik pulse and synth rambles. From the striving incursion of ‘Sally IV’ to the softly spoken disbelief of ‘Yellow Rain’ the album is nothing short of a waking dream. Guy Smith’s vocal floats through the album in a haunting manner, at times heartfelt at others overcome. He’s on a quest to his own celestial city and we can stay for the whole journey if we only listen.

Described by the press upon its release in 1982 as an "absolutely mesmerising double album travelling through progressive rock, via industrial folk to freaky art-punk whilst sounding delightfully coherent" and “a huge slab of mindblowing dark psychedelia” the album was critically acknowledged for its peculiarly British kosmische. However for an album so indebted to the fertile soil from which it sprang, it’s curious that ‘More Wealth Than Money’ never came out officially in the UK. The band’s label Illuminated were temporarily blacklisted by their distributor because of unpaid debts and so the album was only available from the band at concerts within the UK. The bulk of the record’s sales went to mainland Europe on export.

Upset The Rhythm are now very proud to finally give ‘More Wealth Than Money’ the release it’s always deserved. On December 1st, 35 years since the album first appeared, Upset The Rhythm will be reissuing the newly re-mastered ‘More Wealth Than Money’ album, alongside a further full-length collection of demos and unreleased tracks from the album’s overlooked corners. Both the 2xCD and DLP versions also come with a booklet contextualizing the release, full of anecdotes and photos from all band members. This release follows on from 2015’s ‘Return Of The Ranters’, Normil Hawaiians’ lost final album from 1985, which ultimately saw the light of day in a different age through Upset The Rhythm too.