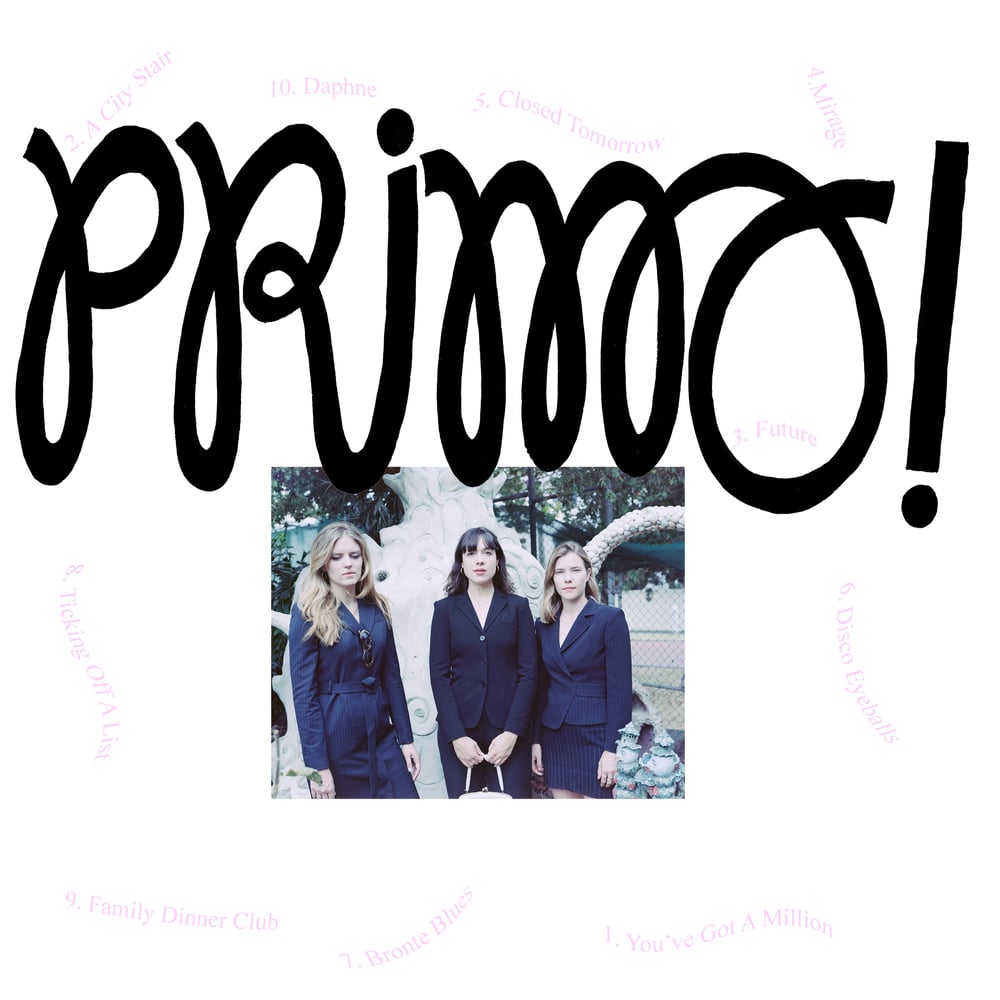 by TERRY and PRIMO!

Primo are Xanthe Waite, Violetta DelConte Race and Suzanne Walker. As a trio from Melbourne writing up-tempo, terse chorus and verse, Primo make use of two guitars, drums, sound effects and a group vocal sensibility to ornament their enquiries into deconstructed punk and indie rock. Their songs chime and charm, sounding at times bountiful, at others brittle, always buoyant with attention to detail.

‘Amici’ is Primo’s debut album, following on from their split 7” last year and a cassette of early work entitled ‘Primo Cassetto’ from 2016 on Hidiotic. ‘Amici’ was recorded and mixed by friend Al Montfort through 2017. The collected songs reference the 40-hour working week, the city, bureaucracy, walking, a mirage and a ghost. In form the songs are short and purposeful, “leaving footsteps in the snow” much like the protagonist of their wistful invocation to ‘Daphne’.

A sense of haste and motion is imbued through Primo’s songs, linking up with the album’s lyrical themes of acute observation, mindful conservancy and the dislocated meaning behind modern life. “Got the paper, got the pen, got the deadline, in the line, out of traffic, got the stapler” they sing united on ‘Future’. ‘Bronte Blues’ is a similar rapid tumble of melody and problem solving, detonated by the line “you’re a magnetic strip, living on borrowed chips”. The vocal clarity of these tracks place Primo promptly in our own heads, the band’s intriguing lyrics springing forth like our very own flights of fancy. There’s an honesty and emotional distance at play in these songs too, with their instructions, lists and procedures leaking into our semblance of self. “Tell me more, tell me more” voice the band throughout ‘Disco Eyeballs’. The quest to lucidly understand underpins the whole record.

Primo take you from A-to-B with their songs, from the appetite of another place to the bird’s eye view. ‘Family Dinner Club’ deals with anonymity and suburbia, whilst ‘Ticking Off A List’ admits “there’s a fogginess to some beauty, you look outside, I can’t know what you see” before urging us to take to the footpath. ‘You’ve Got A Million’ races all over town, whilst ‘Closed Tomorrow’ talks of a “a car going by, one day out of life, going home or to another man-made space”. These songs are alive and inquisitive, chasing down questions for answers long sped-away, amidst minimalist shuffle beats and ringing-out chords. ‘Amici’ is a triumph of the underplayed, its small details pull focus, allowing the album to treat us to unexpected truths in plain sight.

Primo's newest member since 2018 is Amy Hill, who also plays in Terry and Constant Mongrel, on bass. Outside of Primo, Xanthe and Violetta have both lent their guitar skills to Terry and The Shifters respectively, whilst Suzanne works in film too. The band’s debut album ‘Amici’ will be released as LP and CD on Upset The Rhythm on July 13th and followed up in August with a European tour.