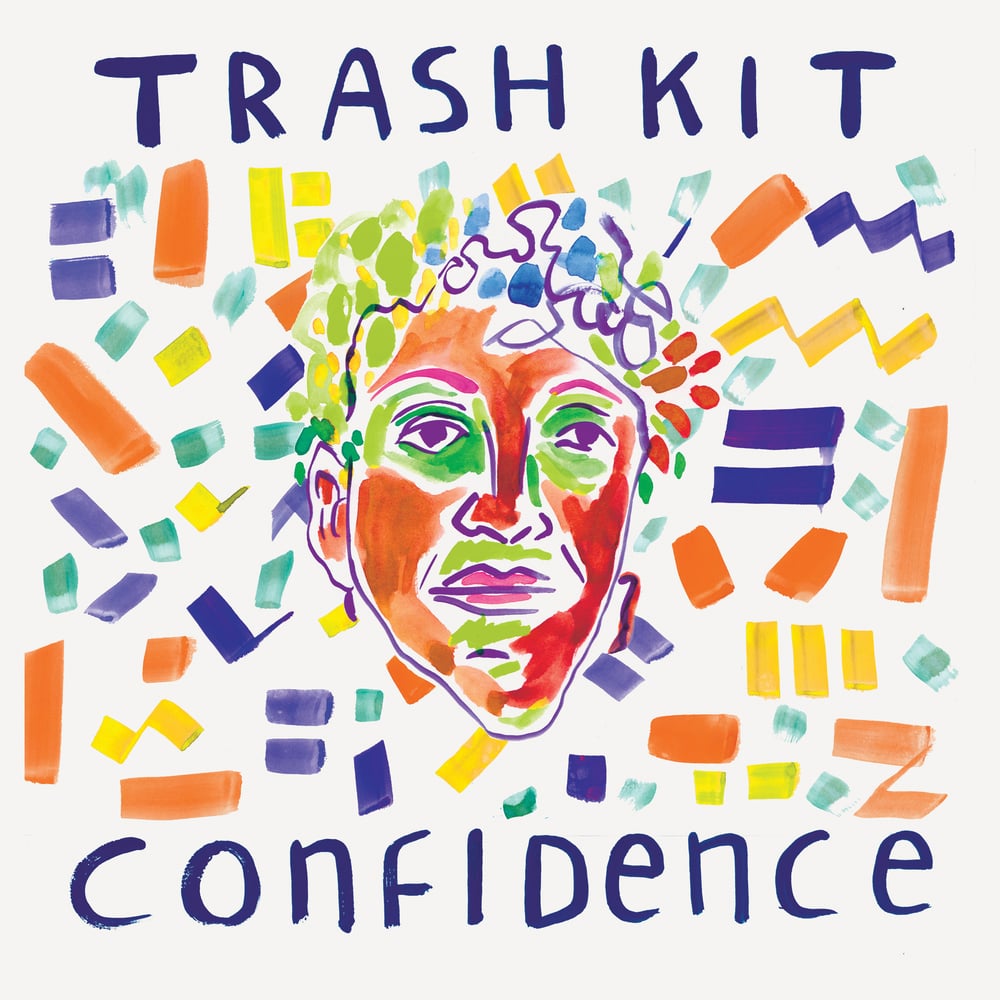 TRASH KIT have a wild feel for melody, writing songs that pull at the reins with a spontaneous charm. Having formed the band in 2009, Rachel Aggs, Rachel Horwood and Ros Murray have since become the glowing core of London’s DIY underground. Their music is primal yet thoughtful, affirming yet sincere, drawing on the potential of post-punk and the naturalism of an internal folk music. Although Trash Kit have their forebears in bands like X-Ray Spex, The Ex and The Raincoats, their sound is very much their own take on facing forwards. Galloping polyrhythms, overlapping sung-spoke lyrics and entwining guitars are all drawn together into a taut unity, sounding willfully alive. Both Rachels tangle their vocals with each other whilst expressive drumbeats and restless guitar flurries provide the rhythmic drive. Aggs’ guitar playing is as much informed by African fingerstyle patterns as the percussive attitude of various no wave shredders. Horwood approaches her drumkit with an untamable freedom, pushing it into the realm of a vivid lead instrument. Trash Kit's music is full of pauses, woven silence and punctuation too and this is where Ros Murray and her resonant, soulful bass work finds a perfect home.

In 2010, Trash Kit released their self-titled debut album on Upset The Rhythm, which met with critical applause. The Sunday Times called it “tumbling, spirited and joyously nimble”, whilst it reminded The Quietus that “female punk can sound like cocoons cracking open in full fierce sunlight”. Since then Trash Kit have toured Europe several times, recorded two more 7”s and explored other musical projects as members of Golden Grrrls, Halo Halo, Sacred Paws and Shopping most notably. Writing for their new album, entitled ‘Confidence’, started up again in 2012 and saw the band over the last two years recording sets of songs at DIY recording hub Sound Savers with Mark Jasper. When the basket became full earlier this year, the tracks were then handed over to Canadian musician / sound engineer Sherry Ostapovitch for mixing, before they were mastered by Mikey Young (Total Control etc).

As a follow up to their exuberant debut album, ‘Confidence’ sticks with the “play it all live” pluck we’ve come to expect from Trash Kit. There’s a minimal bent, a lyrical directness, an unadorned ethic that all evokes the sense that the song is being written at the same time as it’s performed. Yet whilst the first album at times felt too fleeting, its succinct songs flashing by so fast, ‘Confidence’ is startlingly more assured, allowing ideas to develop, conclusions to be gathered. Tracks like ‘Hair’, ‘Skin’ and ‘Boredom’ embrace dynamics like never before. Their clatter and chime are complimented through subtler passages of introspection and the occasional noisy breakdown, with snare and cymbals approaching roar. Ros is joined by her previous bandmate Verity Susman (of Electrelane) on a few tracks including the adventurous ‘Shyness’ and lead single ‘Medicine’, lending some fluently inventive saxophone flourishes. It all adds to the heady, sensation of free-falling through the album. A feeling that the horizon has become broader.

‘Beach Babe’ dashes away with the start of the album, “We spent the summer waiting for summer to come, if we keep waiting we’ll be waiting for summer til it’s gone” declares Aggs over some decidedly racing drums, her guitar riff playfully leaping out in front of the rooted low-end. ‘Big Feeling’ is a patchwork rush of staccato chords, elastic bass and brisk drum fills, all set off by the band’s wordless vocalisations which feature on many of the songs when words can’t get close enough. ‘Leaves’ meanwhile is a more tender rumination, beginning with nature: “Sun shines in through the leaves, this warm glow. That way you look at me, I just know” harmonise Aggs and Horwood. Towards the end of the song its title shifts meaning though as we hear that it all “Leaves me speechless, leaves me speechless, try to hide all this but somehow you already know”. This delight in dual meaning is present in the album’s title too, with Aggs admitting that she liked the ambiguity of it. Her diary entry-like lyrics are seemingly spoken to you in confidence and trust, as well as embracing ideas of self-belief.

‘Confidence’ is a robust album with several themes at its heart that keep reappearing. Lyrically the tracks deal with identity, miscommunication, the passing of time and listening closer. Trash Kit are unmatched at making the personal poetic and vice versa, they never become overwrought, they just keep things honest and follow their natural course. Overall a feeling that you must run with the moment and trust in yourself emerges, echoed brilliantly through the instrumentation. There’s a restless energy that abounds, a momentum growing stronger, an alchemy at play between each member of Trash Kit and between each song on ‘Confidence’. It’s this reason why we should listen closer, listen to the sum of the parts, listen to ourselves. One day we’ll find gold where once there was only hope.