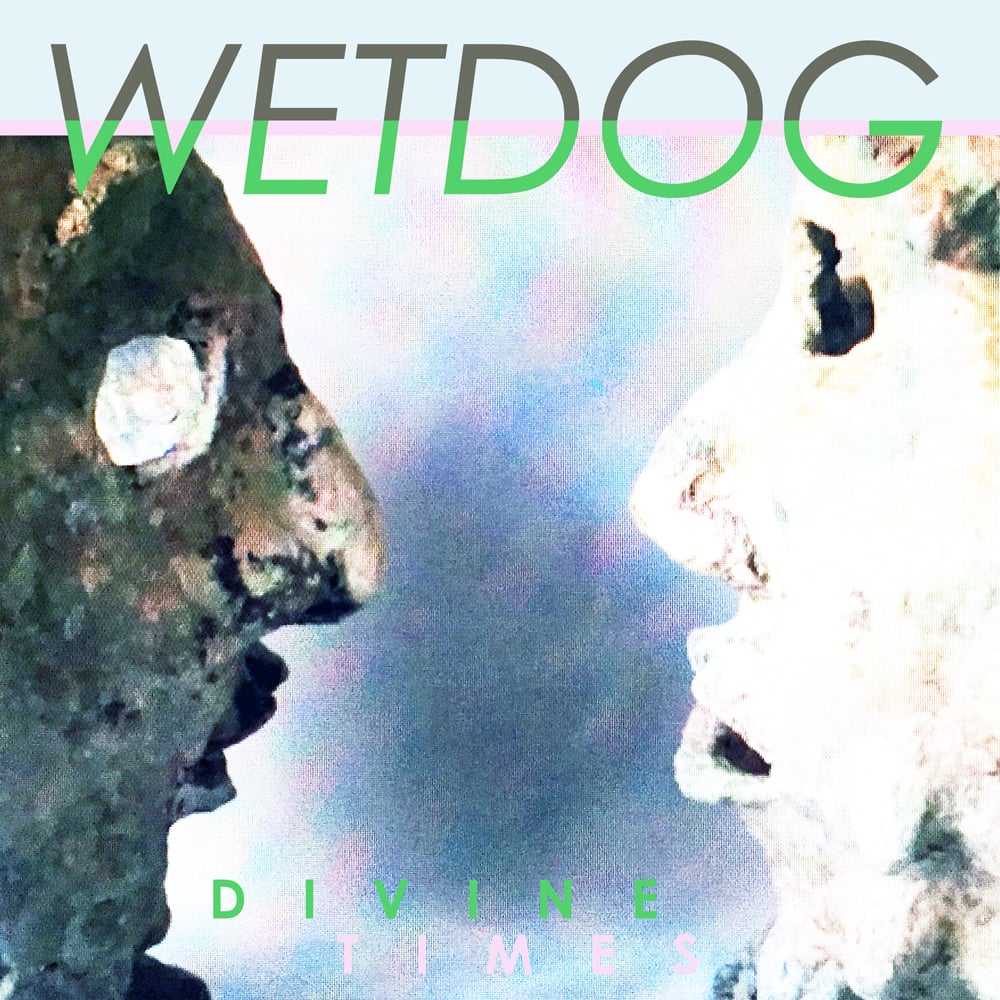 WETDOG are Rivka Gillieron, Sarah Datbylgu and Billy Easter, three female individuals with an expertise for chasing down melodies across their songs. Previous albums on Angular and Captured Tracks have indicated their interest with the minimal palette of post punk and whilst that remains a glowing core to their coals over the last five years WETDOG have evolved in their approach to making music. Whereas their debut album ‘Enterprise Reversal’ was overflowing with melodic clatter, their follow up ‘Frauhaus’ seemed decidedly darker and disparate. Since that release WETDOG have become a transatlantic proposal. Separated by an ocean, the trio have had to work harder than ever to rope together their instincts.

This commitment to staying in touch with each other as well as in touch with their sound can be heard throughout their new album ‘Divine Times’, released by Upset The Rhythm on May 4th. Keen ideas swirl, each afforded the luxury of time and due process. Contrasts and flights of fancy that sounded haphazard before are now as enmeshed and integral as the band’s close-knitted mix of venturesome drumbeats, sinewy guitar lines and bass anchor. Songs like ‘Message’ and ‘Chocky’ almost levitate with exuberance, their overlapping vocals pinned down by the propulsive rhythms stoked, the effect is delirious and pulse-quickening. ‘Small Talk’ makes for dizzy terrain with a spry cluster of chords and dub-dipped quavering. ‘Ridgway Crash’ echoes a similar music hall sensibility, its keyboard phrase weaving amidst a preset bongo beat, radio static and eldritch choir. WETDOG have had time to let these flowers grow into something a lot more poignant and pointed. There’s something lasting being reached for here if you listen closely.

‘Divine Times’ is a distinctive album, hatched slowly, long distance. The band’s effortless style of song-writing has been given room to develop, with some of the more measured tracks on the album like ‘Twilight’, ‘Jym Fingers’ and ‘Divine Times’ making greater strides over time than the more immediate danceable material. Tumbling drums, folk-horror backing vocals and an elastic bassline provide an uncanny setting for guest vocalist Russell Walker’s drowsy narrative on ‘Jockey Slot’, all the makings of a disquieting dream. In fact the whole record leaps and dives through your subconscious very much like a waking dream.

It’s fitting that the album takes its name from album track ‘Divine Times’ as this best represents where WETDOG have arrived with this record. ‘Divine Times’ starts with an ominous drone and rattling change in pocket drumbeat before Rivka’s voice climbs up on a thermal. “In Divine Times, a thousand decorations fall down from the sky” she sings. The songs on this album feel similarly like spontaneous gifts from on high, as plentiful as rain, as miraculous as a swarm of locusts. There’s an Old Testament nuance with the song that lends a vastness to the band’s vision. The bass is the only other instrument that joins the dauntless vocal and keyboard rumblings and that only kicks in after the two-minute mark. There is no rush to the pay off, only well considered choices that pack an even greater punch when they are left stark in such a sparse context.

‘Divine Times’ is an uncompromising album, it’s an assured album that’s been waiting for us to catch up. It has all of the tropes of what you’d expect from WETDOG, the characteristic fervor, deadpan humour, falling-to-bits willfulness, yet ‘Divine Times’ transcends the band’s love of all things disjointed and accidentally happy. It’s the sound of WETDOG confident out there on their own limb. There’s no looking down, only soaring upward.